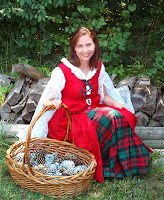 Jennifer Hudson Taylor writes historical Christian fiction set in Europe and the Carolinas. Her fiction has won awards in the American Christian Fiction Writers' Genesis Contest, and her work has appeared in national publications, such as Guideposts, Heritage Quest Magazine, Everton’s Genealogical Publishers, and The Military Trader. Jennifer graduated from Elon University with a B.A. in Journalism. When she isn't writing, Jennifer enjoys spending time with her family, traveling, genealogy, and reading. She resides with her husband and daughter in the Charlotte area of NC. Highland Blessings is her debut novel. Learn more about Jennifer at http://www.jenniferhudsontaylor.com/.
SDC. I loved reading all that about you, Jennifer. Welcome to A Pen for Your Thoughts! Before we start talking about you as a writer, let’s discuss who you are away from your desk. Tell us a little about yourself as the lady next door.
JHT. I’m an introvert who loves the outdoors, but you won’t find me gardening. I’m practically allergic to everything in a garden. I best keep plants and flowers looking well if they are plastic and all I have to do is dust them. As a result of my allergies, I’m on allergy shots each week. I love the beach and the mountains, so my native state of North Carolina suits me well. I’m nestled right between both here in the Charlotte area. I met my husband when I was fifteen in a grocery store and we married years later right after I graduated college. We are the proud parents of a special needs daughter who is overcoming many of her delayed developments. I have another full-time job outside the home and I’m dreaming of one day staying home to write.
SDC: That said…you have a book being released soon. You must be excited. Tell us more about it.
JHT:  Highland Blessings, Scotland 1473. Highland warrior Bryce MacPhearson kidnaps Akira MacKenzie on her wedding day to honor a promise he made to his dying father. When he forces Akira to wed him, hoping to end a half-century feud between their clans, she struggles to overcome her anger and resentment. . .Yet her strength in the Lord becomes a witness to Bryce. But there is a traitor in their midst . . . and murder is the ultimate weapon.


SDC: Sounds so good! And what else are you working on?
JHT: This one takes place four years later.  It will be called Highland Sanctuary. Gavin MacKenzie is hired to restore the ancient Castle of Braigh. He discovers a hidden village of outcasts that have created their own private sanctuary from the world. Among them is Serena Boyd, a mysterious and comely lass who captures Gavin’s heart. The villagers have an intriguing secret, while Serena harbors a deadly past that could destroy her future. When a fierce enemy launches an attack against them, greed leads to bitter betrayal. As Gavin prepares a defense, the villagers unite in a bold act of faith, showing how God’s love is more powerful than any human force on earth.
In this story I modeled the heroine in Highland Sanctuary for my daughter, Celina. She was born with a life-threatening seizure disorder and would stop breathing and require CPR. My husband performed CPR on her eight times during her first year of life. I’m so thankful for modern technology, the seizure meds she had, and the fact that we understand it is a medical issue. I created a character in 1477 Scotland that has a seizure disorder in a time when the word seizure wasn’t widely used. Modern technology wasn’t available, and people’s reactions would have been much different.
SDC. That's awesome, Jennifer. I know I'm going to want to read this book too. You know, I devloped post-traumatic epilepsy from a brain injury years ago. I know exactly what you speak aobut when you describe the fears and the meds that finally work, and modern technology. It's amazing. It looks like you've already partly answered my next question which is what was your inspiration for this book?
JHT: Over the years I had read many secular historical romances set in England and I can’t remember one I didn’t like. I thought there needed to be a few in the CBA market. Very few Christian historical romances are set in Scotland. I wanted to fill a portion of that void.
SDC. That's true. If you have other works already contracted tell us about those too.I do know like you’ve been a busy lady! How long does it take you (on average) to write a book, from first word to putting it in the publisher’s hands?
JHT. Highland Sanctuary, the sequel, is the only other book I’ve been offered a contract on. However, I have written seven other novels, including Regencies, an Irish historical, a couple of American historicals, and one contemporary that won an award in the ACFW Genesis Contest in 2007.
SDC. Then it sounds like you are well on your way! So what’s after this? And what you do when you are not writing?
JHT. Let’s see, as soon as I turn in my completed draft for Highland Sanctuary, I plan to finish working on a Regency, A Season of Atonement set in 1808 England. Regina Westfall has run out of options and soon will be considered upon the shelf. When Marcus Silverstone returns from South Africa alive, Regina believes her prayers have been answered. But he’s no longer the humble, caring missionary she fell in love with years ago. Marcus believes her brother betrayed him in South Africa, and he wants revenge. She must discover who really betrayed Marcus and left him for dead before he ruins their future. She prays one season will be enough to slip through the thorns in his heart and convince him of her and God's love as atonement for seven years of injustice.
When I’m not writing, I spend time with my family, read other novels, watch movies, and travel. My dream is to visit Scotland one day.
SDC: I'd love to go there too. My family goes back to the Scots on my mother's side. And it will be such a joy. I got close when I went to Ireland. Tell, us what do you enjoy most about writing, Jennifer? Least?
JHT. Creating unique characters and weaving a story that is will touch other people’s hearts—perhaps even change lives. The thing I dislike the least is unfair criticism. It’s very clear when a person simply doesn’t like a particular genre or a type of story or era. I don’t like science fiction and fantasy, and so I stay away from publicly reviewing them or critiquing them. I think others should recognize their likes and dislikes and do the same.
SDC. You’re probably tired of answering this question, but as I learn from many other interviewers, inquiring minds  are often curious. Where do you get your ideas?
JHT: Everywhere. From conversations, magazine and newspaper stories, genealogy research, dreams, etc.

SDC: That's a great answer. Thank you for being with us. Please be sure to let us know where we can find you and your work. We enjoyed your visit, and look forward to reading your book. I know I do. I understand you are planning to share one with the readers here. That’s great too. What question burns in your brain that you would like to ask someone this week?
JHT: You can find me at http://www.jenniferhudsontaylor.com as well as on Facebook, Twitter, and my blog at http://jenniferswriting.blogspot.com.
(My question) How important is a book cover to enticing you to pick up a book by an author you’ve never read before?
THANKS AGAIN JENNIFER
Thank you for having me!
Super question above! I look forward to seeing your answers here. Be sure to leave your email address after your name in case we draw yours!

And we have a winner! Congratulations to Katy Freeland of Bakersfield, CA . Be watching for your book!