Release date NOVEMBER 21st. NOT QUITE AN ANGEL. ENTER your name to win your copy

NOT QUITE AN ANGEL
(Decisions Book Four)

Please come by and say hello.

I will be doing a drawing for a free giveaway for this historical inspirational romance set in 1906
If you are interested, leave your name, email address,
and take a moment to respond. 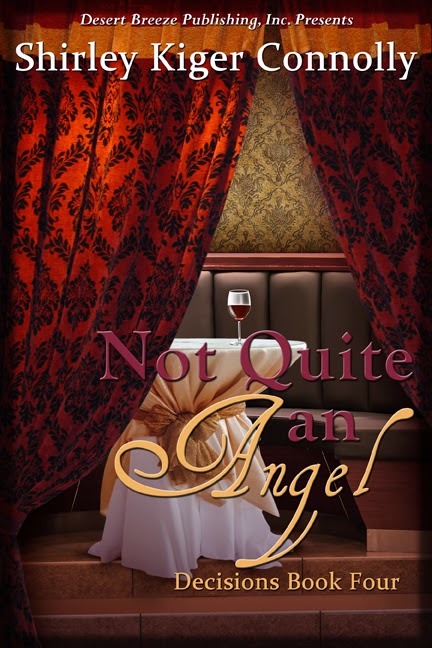 Sir Geoffrey Wentworth thought he knew every alluring woman in San Francisco, until on the night before his return to England he meets and is mesmerized by the mysterious Lady Delphia -- daughter of a French Marquis. While she seems to have appeared out of nowhere, she's  also managed to steal his heart. Maybe,  he's finally found the bride he's been searching for.
When Sir Geoffrey tries to learn more about this irresistible lady of the night, the two are caught and wounded in the throws of a San Francisco earthquake. It's there he discovers this  mystery woman is no daughter of a marquis at all. Lady Delphia aka Miss Daphne Jordan is nothing more than  the sister of a simple country parson, whose also about to be married.
If there is anything the honorable Sir Geoffrey Wentworth, 2nd son to the Viscount of Salisbury cannot abide is being duped by a woman who doesn't even exist.
Excerpt
Daphne backed up. She had nothing to say to Mrs. Merrick. She had nothing to say to Trevor. He would not be listening anyway.
She couldn't look again at Sir Geoffrey after catching the poker faced expression he gave her following Trevor's unexpected pronouncement. Trevor made it sound as if he had won her hand in a game of cards.
"I must go." She pressed two fingers against her forehead again. Before anyone could try to stop her, Daphne turned and stumbled toward the polished wood stairs.
It was as if she was once again in the Tapestry Room. Running from something she didn’t want to have to face, this time, something not of her doing. This time no one called out to her in French. This time no one compelled her to return.
Daphne darted up the ruby red carpeted steps past the doorman and through the double doors. After the doors swung shut, she felt reasonably safe she could look back through the porthole windows and down into the elegant hall; no one could see her now.
Sir Geoffrey and Rand had sat back down and were whispering back and forth. Trevor was leaned back on his chair; his arms folded his pathetic chin still up, another blood red drink in his hand.
A single tear trickled down Daphne's cheek, but it was pointless to cry. Trevor had tried to make a fool of her, but she couldn't let it get to her. She reached up and pushed the tear away.
Daphne started to turn then stopped. She had begun to think something good might come of her developing relationship with Sir Geoffrey. Here on the ship they might have had a chance to know each other better.
He didn't realize it, but Daphne had become incredibly and irresistibly charmed by him. She couldn’t begin to explain why.
Now he would never know.
Maybe all this was not God's intention, but it had seemed at first as if it was the Lord who had brought them together again.
It had to be more than a coincidence.
At the table Sir Geoffrey had been amiable, warm, gracious, even. For the first time, Daphne had begun to see him in a different light.
Unfortunately, once Trevor arrived, everything changed. His untimely presence brought to ruin any hope for a growing bond between Daphne and Sir Geoffrey.

Vets -- THIS IS TO HONOR YOU

God bless you, our Veterans -- and thank you for all that you've done over the years to keep us free.
You are thought of always by so many of us, and especially on
Nov 11th -- your day.
May none of us as Americans ever forget
FREEDOM ISN'T FREE

Posted by Unknown at 7:49 AM No comments: