For the last several years I've had the privilege to work alongside several outstanding authors over at Vinspire Publishing. One of my fellow author friends has a book out that might be just the thing for that perfect October read.  How could anyone resist "a crumbling tombstone ... a life cut too short ... and a grave best left undisturbed"? Yes, a visit to an abandoned cemetery with Caretaker John Riley should entice us all to want to open the pages of Beguiling by Nolan Carlson.

Author Nolan Carlson is married and the father of four grown children and five grandchildren. He has served in the military and also in the public school system as a teacher and counselor for twenty-four years. Also a business owner for twenty years, he has been a professional writer for twenty-nine years and has had many young adult books published. His goal is to provide wholesome and entertaining material for young adults. To date, he has had fourteen books published.

Let's take a peek together at what we might find between the covers. 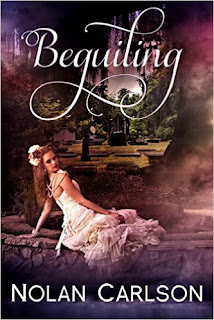 Taking care of an abandoned cemetery isn’t everyone’s idea of summer fun, but for John Riley, it means money in his pocket and plenty of time for baseball and his girlfriend. Admittedly, it’s a little boring…until he discovers a crumbling tombstone outside of the cemetery fence. Though his instincts tell him to leave it alone, John wants to learn more about the sixteen-year-old girl who died in 1925.

His obsession grows as the days pass. He’s spending
more time with the grave than he is his girlfriend, but he can’t walk away. And when he hears flirtatious laughter coming from beneath the soil, enchanted.

When a ghost takes the shape of a lovely young girl, John is drawn to her. She connects to his soul, and he can’t imagine not loving her. But he doesn’t recognize the evil beneath the possessive, beguiling creature who claims to love him in return.

Check out more about Nolan Carlson.