It's Time You Met Sarah! 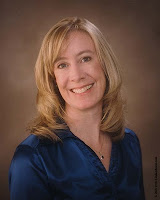 If you haven't met her before, here is your chance to meet debut author Sarah Sundin for the first time. Please join me in welcoming her to A Pen for Your Thoughts.
Sarah Sundin’s first novel, A Distant Melody, was released (just last month) in March 2010 by Revell. She lives in northern California (where the sun likes to shine at the right time of year) with her husband and three children. When Sarah isn’t ferrying kids to soccer and karate, she works on-call as a hospital pharmacist and teaches Sunday school and women’s Bible studies.

SDC: Sarah! Congratulations on your new release! Tell us how you got where you are today, a little about your novel and its publisher.
SS: I started writing in 2000 and churned out two awful contemporary romances. However, I learned through this process, and began attending a critique group and writers’ conferences and reading books on writing craft. In 2003, I submitted A Distant Melody, the first book in a World War II trilogy, at Mount Hermon Christian Writers’ Conference. I received good feedback from published authors, editors, and agents—and began accumulating a stack of “good” rejection letters. They liked my writing, my story, and my characters—however, historicals weren’t selling. I often felt discouraged, but the Lord made it obvious that He wanted me to finish the trilogy, so I kept plugging away. Then at Mount Hermon in March 2008, I heard, “We need historicals.” And there I was with my trilogy close to complete. I submitted to Vicki Crumpton at Revell, and in September I was offered a three-book contract.
SDC: What a great story, and a familiar story to so many of us, Sarah. In fact, it is the key to how to take those stepping stones to getting on "the other side."

Sarah: A Distant Melody was published by Revell in March. (A little about the story...)

Lt. Walter Novak flies a B-17 bomber in battles over Nazi-occupied Europe during World War II, while Allie Miller serves in the Red Cross against the wishes of her wealthy parents and controlling fiancé in California. Walt and Allie meet at a wedding and begin a correspondence. As letters fly between Walt's muddy bomber base in England and Allie's mansion in an orange grove, their friendship binds them together. But can they untangle the secrets, commitments, and expectations that keep them apart?
SDC: That does sound exciting! How did you come up with the idea for it?


SS: It came out of a “what if” question in one of the contemporary novels I wrote. What if a man and woman met at an event, truly clicked, and parted before exchanging contact info? Wouldn’t it be romantic if he went through great effort to track her down? It wouldn’t work in a contemporary setting—he’d “Google” her—but it made a sweet premise for a historical. My husband and I watched a History Channel special on the US Eighth Air Force based in England which flew over Nazi-occupied Europe during World War II, and I had my link. My great-uncle was a B-17 bomber pilot with the Eighth, so I had access to family stories plus his personal letters. My research fascinated me so much, the story expanded to become a trilogy, with each book focusing on one of three brothers.
SDC: I love it! Isn't it neat how we can discover all kinds of creative ideas just by watching The History Channel, or one of those learning channels on TV? Which character in your novel was the most difficult to flesh out and why?

SS: I think it was Allie, my heroine. She’s wealthy and cultured, so in my mind she always spoke in complex sentences with long words—I had to tone down her voice so she wouldn’t put off readers. Also, unlike most modern heroines, not only is she not pretty, but she’s shy and passive at the beginning of the book. I had to make certain I showed the germ of strength inside her and the longing to change.

SDC: When you spoke of a heroine putting off the readers it kind of reminded me how I tend to overplay my heroine's in my drafts to try to get out where they are coming from to where they are going. But an author indeed has to be careful in the handling. How have you begun building and growing your audience and fans, Sarah?

SS: As a debut author, I feel like I’m flying blind in that area. Revell did a great blog tour for me, I hired a publicist for a contest and blog tour, and I jumped at the chance to every blog interview I could—like this one. I also try to spread the word about my book—gently—on Facebook and Twitter. In the long run, it comes down to word of mouth, and word of mouth depends on whether people like the book. I’ve been blessed with wonderful reviews so far, and the response from readers blows me away. When you pick up a book by a debut author, you’re taking a chance, and I appreciate it.

SDC: It's a blessing to read those words. Tell me somthing. If you were to take your heroine to church with you how would she be received the way she’s portrayed in the beginning of your story?

SS: First of all, my church is very accepting and tries to make everyone feel welcome no matter their background. You see all sorts there—and I love it! Since Allie is polite and proper, and she loves the Lord and wants to serve Him, any church would welcome her. However, she might get overlooked because she’s shy and not terribly pretty.

SDC: Would most women be drawn to your hero immediately or is it possible they would be irritated by him and why?

SS: Few women would be drawn immediately to Walt. He’s not handsome, and he gets tongue-tied around single women. He’s the kind of man who grows on you—he’s kind and good-humored and has a strong character.

SDC: The book really sounds interesting. Now, on another note: What is the first thing you think about when you rise in the morning?

SS: That alarm clocks were invented by Satan. Then I slog through my morning routine. No thinking occurs until at least nine o’clock. Ask my kids.

SDC: LOL  Okay, Sarah, after you get this novel off the ground, where do you go next?

SS: A Distant Melody is the first book in a three-book series. The second book, A Memory Between Us, comes out in September 2010, and the third book in August 2011. Right now I’m preparing a proposal for another series, also set during World War II.

SDC: Very interesting time period. Every writer struggles about something. What do you struggle with in your writing?

SS: What’s most difficult to me is description. In my rough draft it always feels like the drivel I wrote for creative writing in high school. Gag. In rewriting I try to work in story-related and character-related details and metaphors to enrich it and remove the gag-factor.

SDC: Where can readers find out about you or your writing online? Please include the link for purchasing your book!

SDC: You gave us lots of choices. Thanks.

If a potential reader of your book wrote a comment to you today, what question would you like to ask them more than anything? (This will help me select the winner of your book)
SS: What’s your favorite time period in history to read about?
Thank you so much Sarah, for sharing a little something about yourself at A Pen for Your Thoughts.
Readers, writers, and responders. See the above question to refer to in your answers. And please be sure to include an email address where we can reach you if we should draw your name to win a copy of Sarah's new book. We look forward to hearing from you.

Join me in congratulating Lucie Buchert from Fortuna, CA who just won Sarah's book! Be watching for it soon, Lucie. And many blessings to you all for writing in.
Shirley