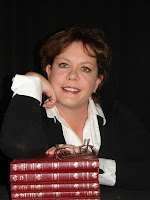 Cynthia Hickey and her husband reside in Arizona with two of their seven children. Fudge-Laced Felonies is the first in the Summer Meadows Mystery series. Books two and three are due to be released in 2009. She is currently writing a new series with the first book release the summer of 2010.

SDC: Before we start the process, Cynthia, what do you do when you are NOT writing?

CH: I am a Detention Monitor at the local elementary school. I am also a book reviewer and am constantly reading. Relaxation comes in the form of hanging out with family and making photo DVD movies.

SKC: What book or project would you like to tell us about today?

CH: My first novel, Fudge-Laced Felonies was released through Barbour’s Heartsong Presents/Mysteries in June of 2008. It is available for retail the end of January 2009. I wrote the book on a dare from a friend. Won first place in a contest, acquired an agent, and here I am. It’s been a roller-coaster of a year and I’m having a blast. It was very sad to say goodbye to my heroine, Summer Meadows with the completion of book three.

SDC: What inspired you to become a writer of inspirational books?

CH: God, plain and simple. My conscience will not allow me to write something that belies my faith or that I have to tell my grandchildren they can’t read until they’re older. Without God, I honestly believe my writing would not be.

SDC: What encourages you to continue writing?

CH: Again God, and the fact that I can’t imagine doing anything else. It’s as much a part of me as breathing.

SDC: Are you in any Groups that help you in your writing? Or ministry groups online? If so, tell us about them.

CH: American Christian Fiction Writers Association has been invaluable. I’m learning every day and have made great friends.

SDC: We all know as authors the importance of not getting too puffed up about what we do. I always seem to find at least one ghastly mistake in my novels AFTER they are published, and if anything keeps me humble that does, knowing it is too late to fix what is already in print. What is the one thing that keeps you humble about being a published author, Cynthia?

CH: The fact that, if God so chose, I could lose the gift as much as having received it. My writing isn’t for my glory, but for His. One of the first people to read Fudge-Laced Felonies approached me and thanked me for writing it. Said the book came at the right time in her lif

e. It was just what she needed.

SDC: What is your CYNTHIA secret to writing a good book?

CH: A wonderful imagination and lots of prayer!

CH: Candy-Coated Secrets and Chocolate-Covered Crime, books two and three in the Summer Meadows series are being released. I am also writing a couple of romantic suspense that I hope to get published.


Thank you so much for joining us, Cynthia! I understand you have a free book offer. Please tell the readers about it and how they can find you on the web.

CH: Summer Meadows entered church on Sunday, not to find God, but to search for a killer.While transplanting the rosebush her church's handsome Sunday school teacher, Ethan Banning inadvertently killed, Summer and Ethan discover a hidden stash of diamonds, a rusty can full of cash, and a bloody gardening glove. This discovery sets Summer and her candy-making aunt on a search for a killer.As Summer gets close to the truth, not only of the theft, but of her true feelings for Ethan, the diamond thief hatches a plan to hush the feisty sleuth.Ethan's love for Summer stays buried beneath his teasing, waiting until God tells him it is time to declare his feelings. Meanwhile, Summer's quirky and daring resolve to solve the case has him acting in a heavy-handed manner in order to protect her, and almost pushes her away.

I can be found at http://www.cynthiahickey.com/ or contacted at cynthiahickey@cynthiahickey.com.
Please send in a comment for December and maybe you, too, can win a copy of this book!
Posted by Unknown at 5:44 PM