A Visit with Amber Miller 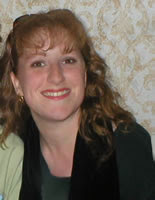 BIO: Amber Miller is an author and freelance web site designer who lives with her husband in beautiful Colorado Springs. They don’t have any children yet, but they do have a vivacious puppy named Roxie, who is half Border Collie and half Flat-Haired Retriever. Already nearing 65 pounds, she keeps them on their toes. And with her penchant for rising at 6am on the dot, Roxie is giving Amber and her husband a good taste of what it’s like to be parents.

Amber has sold four books to the Heartsong Presents line of Barbour Publishing with the promise of two more before the end of the year. She is currently pursuing an expansion into trade-length historical fiction as well. Other writing credits include several writing articles for various publications, five short stories with Romancing the Christian Heart, and nine contributions to the book, 101 Ways to Romance Your Marriage. A born-again Christian since the age of seven, her faith in Christ has often sustained her through difficult experiences. She seeks to share that with others through her writing.

Read more about her at her web site: www.ambermiller.com.


SKC: What books or project are you working on now?

Tiff: Presently, I have a deadline in July for the first book in a new series set in Detroit Michigan during the Industrial Revolution. Books 2 and 3 aren’t due until December and April, respectively. Once book 1 is complete, I will be polishing two trade-length historicals for an editor who has requested them and two agents who would like to take a look at my work for possible representation. We’ll see where God leads.


SKC: What special something inspired you to come up writing for your particular sub-genre? Tell us about the circumstances.

Tiff: I have been a member of the Heartsong Presents book club since its inception. I’ve always loved reading romances and the fact that I can find some without the bodice-ripping scenes or details appeals to me even more. Romance is so much more than sex and physical affection. I’m thrilled and honored that I have a chance to share my own stories with this book club and add to the collection that thousands of members enjoy every month.


SKC: What other pennames do you write under and why?

Tiff: None other than Amber Miller. It’s my middle name and maiden name, and I use it because I was published before I got married. I chose Amber rather than Tiffany because of some preconceived notions about the type of person a “Tiffany” is. Not as many these days recall Tiffany’s Jewelry in New York City, or Tiffany lamps and crystal or even the classic movie with Audrey Hepburn, Breakfast at Tiffany’s. The first thought in most minds these days is a blonde ditz. I didn’t want anyone avoiding my books because of any stigmas. Besides, now I can say I suffer from a split personality. J


SKC: How long had you been writing before you got your first contract?

Tiff: I’ve actually been writing all of my life, but I didn’t seriously pursue a writing career until 2002 when fellow author Tracie Peterson encouraged me to join ACFW. From that point forward, I studied everything I could and worked on my craft as much as possible. I had a handful of short stories published and enjoyed success with a few writing articles along the way, as well as contributions to books. Then, finally, in December of 2006, I sold my first novel.


SKC: What advice do you have for other new authors coming into the field of writing?

Tiff: Writing is not for the faint of heart. It takes a lot of hard work, determination, patience, perseverance and faith. And it won’t happen overnight. You have to maintain a teachable spirit and be open to constructive criticism, no matter how far along in your writing journey you get. In the end, the rewards far outweigh all the sweat and tears you shed along the way. Most importantly, if you feel this is the path for you, never give up!

Tiff: What a great question! There was a time when this statement was 100% true; however, with the rise of Christian fiction and more and more hitting bestseller lists, I see this gap decreasing between the two sub-cultures. If an author has achieved success in the Christian market but feels called to take his/her stories to the general market, I don’t see a problem with it. I do caution an author to not compromise his/her beliefs when writing that novel, and it will become increasingly difficult to do with input from an editor who wants faith references removed or acknowledgement of God kept at a minimum.

Authors like Jan Karon, Debbie Macomber and Karen Kingsbury are consistently on the general market top seller lists. Francine Rivers, Linda Windsor and others wrote for the general market before crossing over to the inspirational. And all of them have enjoyed great success on both sides. As long as the inspirational writer doesn’t compromise the underlying foundation of faith, if he/she is called to broaden the spectrum, I say go for it! The more who are reached by the gospel message, the better.

SKC: Questions many authors are often asked are how they deal with writer's block. How do you overcome it?

Tiff: For me, the blocks occur often, but they don’t usually last long. I might draw a blank for five minutes or so, but I can get going again not long after that. If I’m completely stuck and cannot find a way to move the scene in front of me along, then I jump to another scene and leave a marker in my manuscript to come back to that scene once I’ve filled in spots further along in the story. Oftentimes, the act of writing something that will happen in the near future gives me the incentive and inspiration I need to jumpstart the scene that had me stuck before.

I am by no means a stickler to writing a book in order. Movie and TV producers don’t film them in order. Why should I write a book from start to finish without jumping around to work on what’s flowing the best?

Tiff: For me, it’s the excitement of a new set of characters and a new story. I am known for jumping right into the action or conversation from the first line. I don’t take a lot of time to set up the story or the background. That comes as the story progresses. And since I’m primarily an intuitive writer, exploring this new story with new characters and new situations becomes an adventure for me. I get an idea in my mind on where to start, and start typing. The characters and the story take it from there.


SKC: How do you schedule your writing time throughout the week in between family time?

Tiff: I find that if I set a goal and don’t meet it for whatever reason, it makes me feel like I’ve failed, and that’s the quickest way for me to lose my motivation. So, I simply make a goal to write every day, even if it’s just 2-300 words. I don’t often stop at that, though, as once I get rolling, the words flow.

On a deadline, though, I divide the days I have left by the words I need to write and do everything I can to meet that goal. I don’t have much of a choice, otherwise.

For family time, right now, it’s just my husband and me. We’re trying to start a family with children though, so I’ll no doubt have a different answer when that time comes! Since I work from home, I have no trouble getting a little writing done along with keeping the house clean and preparing meals, running errands and working on my web design client sites.

One thing I’ve noticed is I tend to take care of errands and client work in the AM and writing in the afternoon or late at night. It doesn’t always work this way, but that’s the most common routine. This allows me to share breakfast and dinners with my husband and still have quality time to myself to take care of everything else.


SKC: Many authors cringe when it comes to the moment they have to come up with their synopsis. What would be your best advice to them?

Tiff: I’m one of those who cringe, as I don’t like planning out a story in detail before I start writing. So, I keep it generic, blocking out the number of chapters and perhaps 1-2 sentences for each scene in a chapter. For my romances, this ends up being 1-2 sentences for the hero and the heroine in each chapter of the synopsis.

So many authors have taught workshops and presented outlines and guidelines for writing a strong synopsis. Linda Windsor comes to mind, and you can contact her through her web site for the guidelines she has available. (http://www.lindawindsor.com/) Gail Martin has a blog on writing (http://writingright-martin.blogspot.com/), and Mary DeMuth does as well (http://wannabepublished.blogspot.com/). All of these have fantastic information for writers and links to other sites as well.

SKC: What do you do during the waiting period when editors are looking over your manuscripts?

Tiff: At the start, before I was published, I spent a lot of time twiddling my thumbs and writing articles or studying the craft. Now, with deadlines, I usually have at least 1 or 2 projects going at once. So, the time spent waiting to hear back often passes quickly for me. It’s happened that I’ve received edits or responses back and thought it was a fast turn-around when in fact it might have been several weeks or a couple of months.

For the most part, though, once I send something out, I make note of the date and where I’ve sent it, then get to work on another project.


SKC: After you finish your present project, what plans do you have?

Tiff: As I mentioned above, I have two more books in this series after the first book is done. But, immediately after my deadline, I’ll be polishing two manuscripts and getting them ready for the ACFW national conference in September. Summers are hard times to send anything to editors or agents, so I’m going to wait until the fall when their schedules open up a bit more.

I long to branch into trade-length fiction, so that will be a primary focus once this current book is done.

Thank you for asking me to participate!

To visit Amber and check out her books more closely, go to http://ambermiller.com/

Your comments are welcome!
Posted by Unknown at 10:32 AM