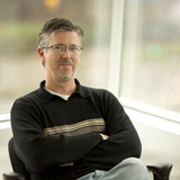 Brian Ritchie has 25 years in the publishing business as a manager and innovator at a large metropolitan newspaper. He is a freelancer, author and occasional poet. On his blog butterscotchridge.wordpress.com, he writes about the quirky little adventures that everyday life in a family provides. As an author his passion is for sharing biblical stories through futuristic adventures, while including the gospel message. When he isn't writing, or keeping the presses rolling, he spends his time on his real passion, loving on and enjoying his wife and three children, just outside of Cleveland, Ohio.


Anointed: The Chronicles of Ascension volume 1


Anointed takes the reader to a bleak dystopian future, after the United States government has collapsed.


The sitting ruler is a mad man who is steering his subjects to depravity, and self-indulgence. The singular remnant from the collapsed government, Syrus Finn, sets-out on a covert quest to discover and anoint God's new ruler. Desperate and on the verge of giving up, he discovers Duncan, a wild and untamed boy. Could this really be God's chosen King? As the boy eventually finds himself working in the Palace, war is waging out west, against the bitter separatist country, Pacifica. The armies face-off and the tension builds as Pacifica presents their vile, mutation Grimm to issue a challenge. When no one comes forward, the unlikely Duncan volunteers to meet the challenge.


Set in a future time, Anointed takes the well-loved biblical story of David and Goliath and follows the events as described in 1 Samuel 16-18.


Once he had struggled to his feet, he turned to the children, and discovered they had all frozen. They were stiff, eyes wide, and afraid.


They heard something, he thought. Something he hadn't, and they were looking right at him. Two or three of the youngest shakily stepped backward, the fear more prominent on their faces than the others. His head raced, somehow he knew their senses were attuned to things out here that his worn set of faculties were not.


He waited, and the children held their positions, as if waiting for affirmation before bolting. Then he heard it, himself. A low, throaty growl, coming from the woods right behind him. The birds hadn't stopped their songs in fear of the children, after all. There was a real predator nearby, and Syrus's instincts told him he was it's prey.


The next one was deeper and longer, menacing and ferocious, its vibrato shaking the very leaves on the bushes. This one revealed it's identity. A bear, and a big one by the sound of it. He had seen them in zoos as a child, but those had no access to him. They didn't live under the rule of the jungle, that drove them to eat or die.


Youthfully stepping off the mat, and several feet down the hill with adrenalin coursing like a drug through his veins, he turned his back to the children, ready to defy, or at least occupy the animal. He wouldn't be much protection for them, but he was closer and the easiest victim, so he would make sure his death counted, and know they would all be able to escape.


What made me do it: 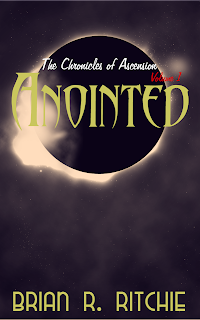 I know it has been said many times by many people, and it feels a little cliche to say it, but I've wanted to write a book since I was a kid. I really have. The real question is, why did I wait until I was in my forties to actually do it? I wish I could say, but when I finally got down to the task, it pored out of me.


I've been forever a fan of science fiction, and have read the C. S. Lewis Space Trilogy and the Lord of the Rings more times than I can count. So when I sat down to write my first book, I knew I wanted to do something futuristic (I'm learning that sci-fi/fantasy are dirty word in Christian Literature), while retelling a biblical story. So, I decided, since I wanted to sell books, it would be wise to write a book that fits in the popular genre of Young Adult fantasy that is so popular these days.


I wanted Anointed to have the appeal of books like the Hunger Games, and I think that is just what it does.


Anointed is available on Amazon, kindle, kobo and a couple other online stores, all of which can be accessed through my web site.


Twitter: twitter.com/BrianRRitchie
HOW OFTEN DO YOU READ C.S. LEWIS STYLE WRITING?
Posted by Unknown at 3:18 PM