He Says It's C.S. Lewis' Fault 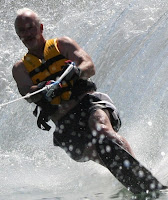 Say hello to James L. Rubart, a "classic seat-of-the-pants" author, I'm sure you'll want to meet, if you haven't yet.


James L. Rubart is the best-selling, award winning author of ROOMS, BOOK OF DAYS, THE CHAIR, and SOUL’S GATE (Nov 2012). During the day he runs Barefoot Marketing which helps businesses and authors make more coin of the realm. He lives with his amazing wife and two sons in the Pacific Northwest and loves to dirt bike, hike, golf, take photos, and still thinks he’s young enough to water ski like a madman. More at www.jameslrubart.com
SDC: Over the last few years you have become both a well-known and talented writer. Before you tell us about your newest release coming, please fill us in on what got you started writing from the beginning.
James-  It’s C.S. Lewis’ fault. I read the Chronicles of Narina at age eleven and knew I wanted to try to whisk people away to new worlds and immerse them in story like he did for me. It became a burning desire that only grew in intensity as the years went on.
SDC:  Tell us about your publishers. How did they find you?
James-  I’m hoping they found me to be full of passion for great stories. Sorry, poor joke.
SDC: I LOVED IT!
James: My first three novels were published with B&H Fiction. My first agent submitted ROOMS to David Webb who rejected it, but said if it didn’t sell somewhere else, to bring it back to him in six months. A year later (in the fall of ’07) I met him at a conference and he said, “I’ve read 200 manuscripts since I read yours and I can’t get it out of my head. Let’s take another run at it.” David got it through his publishing committee in the late spring of ’08.
The relationship with my current publisher—Thomas Nelson—came about through a deep friendship. In the fall of 2008 I met Allen Arnold (who at the time was Sr VP and Publisher at Thomas Nelson) and we quickly became close friends. The friendship had nothing to do with publishing and everything to do with shared passions about life, family, adventure, similar histories, and love of epic stories. In late 2010 he brought up the idea of doing books together and in the spring of 2011 I signed a five-book contract with Thomas Nelson.
SDC:  What kind of response to you receive from readers who have not yet come to know the Lord, or who have been influenced greatly by one of your books?
James-  The response has come from both extremes. Just the other day a friend told me I’m her neighbor’s favorite author—and this neighbor isn’t a follower of Jesus. In another case a man who had fallen away from the Lord came back through reading one of my novels. He gave it to a friend of his who came to Jesus through the book. (After hearing that story I decided I could stop right now. So cool.) On the other hand are non-Christians who have hammered me hard—check out some of my many one-star reviews on Amazon for ROOMS—for writing books where Christianity is prominently promoted.
SDC: How do you make faith, love, and hope work together in your stories?
James- Do those three things work together in my stories? Good to hear. I don’t mean that facetiously. I’m a classic seat-of-the-pants writer. I have the premise in mind, then I just write. So I don’t try to make those elements work together, I simply transcribe the movie I see playing in my mind. But yes, since I’m a Christian faith, love, and hope will intrinsically be part of my stories.
SDC: What was your criteria for selecting your own agent, if you have one?
James-  I met my first agent at a writing conference, we became friends so it was natural to become a client of his. When that partnership didn’t work out long term, I seriously considered being my own agent. (Not a wise move—it’s like trying to be your own attorney.)
A number of author friends said, “You have to talk to Lee Hough.” Lee wasn’t even on my radar, but I figured, “Why not?” After two minutes of conversation I knew Lee was my guy. It just clicked, you know? He’s been phenomenal.
SDC: I haven’t yet had the opportunity to read one of your books and hope to soon. How do you choosing the setting for your characters, and do your characters ever live outside the United States?
James- What! I’m outta here. J  Great question. No, I’ve not had any of my characters live outside the USA (yet).
SDC:  Have you ever written anything that you had to later toss? How would you describe your OLD file system of “works in progress” that you chose not to pursue?
James- The first draft of my first novel, ROOMS was 148,000 words long. I had no clue how long a novel was supposed to be. So when I found out 100k was the upper limit of a first time novel I did a LOT of cutting. From time to time I’ve thought about sharing some of those deleted scenes with my readers.
Regarding those old WIP’s I’ve been extremely fortunate: I don’t have any. ROOMS was the first novel I tried to write and it was published. Same thing with my second attempt, BOOK OF DAYS, and my third, THE CHAIR.
SDC: As we close, please share a brief blurb about your newest book and tell us where your books can be found -- where our readers can look you up. 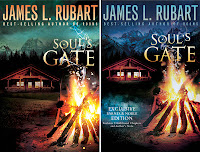 James: What if you could send your spirit into other people’s souls to fight for their healing and freedom?
That’s the premise of SOUL’S GATE and I’m seriously pumped up about this novel. I believe it’s going to make a significant impact in many people’s lives.
Here’s what Publisher’s Weekly says about it: “Readers with high blood pressure or heart conditions be warned: this is a seriously heart-thumping and satisfying read that goes to the edge, jumps off, and “builds wings on the way down.”
Here’s RT Book Review’s take on SOUL’S GATE: “Rubart’s novel is enthralling and superlative. Truly a story about freedom from things that we hold onto, this tale will captivate readers and encourage a more active, dynamic spiritual life. The original plot and well-drawn characters elevate this book to “must read” status.”
You can find me here:  Web: www.jameslrubart.com   Twitter: @jimrubart
Thanks so much for having me, Shirley!