Drop by the Tombstone Saloon and Say Hello to Miralee!

Miralee has visited A Pen for Your Thoughts several times. What a blessing to have her join
us once again. And talk about a picture that FITS her style of writing! It's just perfect.
Come on by and spend a few moments with Miralee with me. 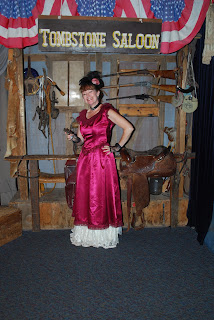 Miralee and her husband Allen have been married 39 yrs.
They live on 11 acres in the beautiful Columbia River Gorge
in southern Washington State, where they love to garden, play with their dogs, take walks, and go sailing. Miralee also
rides her horse on the wooded trails near their home with
her grown daughter who lives nearby. She’s an avid reader
and has a large collection of first edition Zane Grey books,
which inspired her desire to write fiction set in the Old West.

Miralee serves as president of the Portland, Oregon,
chapter  of American Christian Fiction Writers and belongs to a number of writer’s groups.
She also speaks at women’s groups, libraries, and churches about her writing journey.
When  she started writing fiction Miralee believed that she’d always stay with women’s  contemporary, but has since branched out to historical romance.

Shirley: Welcome to the blog, Merilee. I LOVE the picture you decided to let us share! Let's start out with hearing about this new book of yours. In fact, this visit, we mostly just want to hear about you and your new book. So you're on.

Miralee: (Good to be here again, Shirley.) The book is called: Love Finds You in Sundance, WY.


Angel Ramirez is tired of living a lie. But can she learn to live like a lady?
On the run from a dangerous outlaw, Angel works her way across several states disguised as a boy and working as a varmint tracker and horse wrangler. After taking a job on a Wyoming ranch owned by a bachelor and his widowed sister, she finally reveals her true identity and must fight to prove her worth as a ranch hand while somehow discovering her role as woman.
Hiring a woman doesn’t sit well with Travis Morgan, and the dark-haired beauty is causing a ruckus among his cowboys. Just as Angel decides she’ll never be able to please her boss, an unexpected surprise arrives from across the ocean and makes trouble on the ranch. Will Angel leave with the person who’s come so far to claim her?
SKC: Sounds intriguing already. Will you share an excerpt with us?

Miralee: Here is a short excerpt:

Angel Ramirez woke with a start, her heart pounding a rolling beat in her chest. Someone was in her room.

Inching her fingers under the edge of her pillow, her hand brushed against the cold steel of her Colt revolver. she eased the gun out and waited, allowing her vision to adjust to the partial darkness of the muggy August night. Uncle Jose had taught her to wait, never to rush when confronting an intruder -- the first shot might be her only one.
Rolling over onto her side, she pointed the gun at the door. "Who's there?"
A half moon sent tentative fingers of light through the small window near the foot of her bed and a dark form stepped forward. "It's Jose. Put your gun down, m'ija." Her uncle's accented drawl was absent -- the words short and clipped. "Get dressed and meet me outside. Hurry now." He slipped out the door and closed it carefully behind him.

Angel drew on her trousers and long-sleeved shirt, tugged on her boots, and shoved her sombrero onto her close-cropped curls. After a quick look around the room, she grabbed her rifle and headed outside. Jose raised his hand for silence and drew her into the nearby stand of trees, not far from their small, three-room cabin. "Keep your voice down. I don't want any of the men in the banda to hear."
The hair on the back of Angel's arms stood on end. "What's wrong?"
"Another cattle raid. I won't leave you behind. It's not safe for you here."
"With the men?"

"Yes. Bart Hinson's up to something."
Angel sucked in a breath between her teeth. "Hinson. He's the worst of this bunch. I don't like the way he looks at me."
Jose stifled what sounded like a curse and gripped her arm. "If anything happens to me tonight, promise me you'll ride out of here and never come back."

Her heart rate accelerated, but she patted his hand. "Nothing's going to happen to you."

He swung her toward him and leaned close, dropping his voice. "I don't trust Hinson. An outlaw banda is no place for a girl, even if you were raised here. You're eighteen and can take care of yourself away from this place." her uncle pointed to the rifle near her knee. "That rifle will take you far -- you shoot better than most men. Keep dressing like a boy and get work on ranches as a hunter or horse wrangler."
She tried to laugh off his concern, but the effort nearly choked her. "This is my home. You've had these feelings before, and you've always come back safely."

Jose placed his arm around her shoulders and squeezed. "I wish I'd made other choices years ago, m'ija. If your parents were alive, they wouldn't have chosen this life for you. I should have sent you back to your mother's people in Italy." He dug into the pocket of his denim jacket and removed a small bag. "There's gold in there -- enough to keep you a couple of years, if you're careful and work when you can."
She drew back, hating the thought of taking it. She'd never considered where Jose's money came from, but accepting a bag of gold procured from other people's loss didn't set right. besides, her uncle's words implied he might not be along. "You're scaring me."

He closed her fingers over the handful of gold. "I plan  on living for a long time, m'ija. but you must be ready." He swung away from her and called softly over his shoulder. "Saddle Bella, bring a bedroll, and put whatever you value most in your saddlebags -- quick. And whatever you do, stay close to me on the trail." 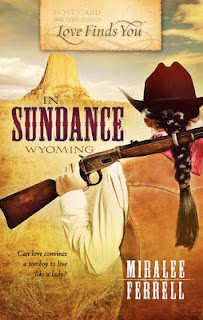 Congratulations to Courtney Melone of Moxee, Washington! You've just won Miralee's new book. Be watching for it soon! And thank you so much for following A Pen for Your Thoughts.
Posted by Unknown at 2:52 PM