When It Comes to Mistaken Identity, You Can Be Fooled Without Even Knowing it! 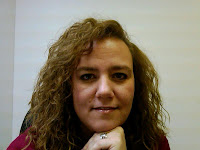 K. Dawn Byrd is an author of inspirational romance and romantic suspense. Mistaken Identity, her first young adult romance released
on June 15 from Desert Breeze Publishing. Queen of Hearts, a
WWII romantic suspense released in April 2010 and was the bestselling book for her publisher during its debut month. Killing Time, a contemporary romantic suspense, released August 1, also with Desert Breeze Publishing. K. Dawn Byrd is an avid blogger and gives away several books per week on her blog at www.kdawnbyrd.blogspot.com, most of which are signed by the authors. She's also the moderator of the popular facebook Christian Fiction Gathering group at http://www.facebook.com/#!/group.php?gid=128209963444.

When not reading or writing, K. Dawn Byrd enjoys spending time with her husband of 16 years while walking their dogs beside a gorgeous lake near her home and plotting the next story waiting to be told.

Eden Morgan longs for a boyfriend of her own, an impossible goal when her best friend, Lexi Branson, gets all the attention and all the guys. When they fall in love with the same guy, Eden believes she doesn't have a chance. She can only hope that sometimes the girl gets the guy.

After dinner, Mom suggested that we go swimming while the adults had coffee. Channing hurried home to change into swimming trunks and, when he returned, I was waiting in the pool. Still a little self-conscious about the few extra pounds I carried, I'd rushed at breakneck speed to get in before he came back. Not to mention that I was embarrassed at the old-fashioned one-piece I wore.

"Want to play some water volleyball?" I called as he sauntered across the patio.

Channing climbed down the stairs into the pool. His chest was broad and tanned, his body pure muscle. He belonged on a magazine cover.

The breeze was warm, carrying the delicious smell of lilac from the bushes between our houses. I breathed in the scent as Channing swam under the water toward the deep end, his body just a shadow under the surface. Dusk had fallen, and the pool lights were on.

He surfaced, and I hit the ball. Channing sent a quick return, which I missed by inches. "Hey!" I yelled. "That's not fair. I didn't see it coming."

Channing laughed. "Maybe you should keep your eye on the ball." There was a teasing tone in his voice.

Stephie would have been right out there in the middle of it if she hadn't gone to bed with a headache. I should go check on her soon. She was prone to the ones Mom called migraines, and sometimes they made her throw up.

We played until I was tired, and then we swam a while. I did some laps, glad that I'd lost at least some of the weight I'd put on during the winter. I was so lost in my thoughts that I hadn't realized I'd swam too close to Channing until I surfaced and found myself almost in his arms. He reached out to steady me, and I stepped forward, attempting to regain my balance.

A shiver tripped over my skin even though the night was warm. My eyes locked with his, and I found myself lost in the mossy depths. He hadn't released me, and his hands were warm on my arms.

We stood there, speechless, drinking in each other in with an odd kind of understanding, an odd feeling that all was well in the world and we were meant to be together. His touch and his gaze were so mesmerizing that I couldn't have looked away if my life depended on it.

"Channing, you ready to go?" called his mother from somewhere across the patio.

The spell was broken. I backed away, hoping our parents hadn't seen the magic that had passed between us. I wasn't sure what my parents would think about my dating a senior if Channing asked me out.

"Good night," I said, turning and diving under the water, my heart beating wildly as what passed between us seemed like a dream, a beautiful, surreal dream.

I surfaced on the other end and watched Channing retreat from the pool. He turned and waved and, just like that, the guy of my dreams, walked right out of my life.
Look for more about K.Dawn Byrd at: http://stores.desertbreezepublishing.com/-strse-template/KDawnByrd/Page.bok BLOG: http://kdawnbyrd.blogspot.com; WEBSITE: www.kdawnbyrd.com

We're give away a gift card for a free download of Mistaken Identity. Leave a comment about what you'd like to see more of in young adult fiction for your chance to win. Looking forward to hearing from you. Please include your email address. Hope I draw your name!

Congratulations to Jeannie Campbell of California! You just won K Dawn's book! Be watching for an email from her.good