One Author's Answer to those dragging moments? Just get out a gun. Oh my! 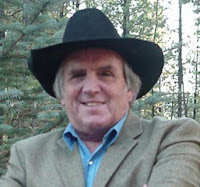 The muddy North Platte River paralleled the train tracks and scattered buildings at Patterson's Siding. Mountains of firewood blocked Catherine Goodwin's view of the river, but as she and Race Hillyard strolled west, the rolling waters and bluffs appeared.
To the south, dry, brown tufts of grass sprawled for miles across treeless, rolling prairie. Occasional wagon ruts recorded the direction of an intrepid pioneer. The morning sky flashed a deep, royal blue with high streaks of white clouds that looked like thick paint slung across the sky. A slight breeze drifted towards them.
Catherine's high, lace up brown leather shoe slipped off the gravel. She grabbed Race's arm. "Excuse me. I hope I didn't twist my ankle." She stretched her foot.
"You're just trying to butter me up for a loan."
She poked him in the ribs, then pulled her arm away. "You better be teasing me."
He slipped her arm back into his. "As long as the good Mr. Phillip Draper of Paradise, California, won't mind, I'm happy to assist a pretty lady on a walk."
"Hmmm. . .a compliment from Mr. Race Hillyard. Should I be suspicious?"
"I'd be disappointed if you weren't."
Catherine studied the faces in the train car beside them. "You know, just yesterday I held you in deep disgust."
"Has that changed?"
"Yes, today I hold you in mediocre disdain."
SDC: Thank you very much, Stephen. I know as others read this, it will spark their interest too. What question would you ask of a reader that might help you in the writing of a book and that might help me to select a winner of your new book coming out?
SB: What interests you most about historical novels and why?
SDC: Oh, now, that's a great question. Thank you so much for joining us at A Pen for Your Thoughts! I can't wait till your book comes up. I guarantee I'll be one of your buyers!
VISITORS! Please take a moment to consider Stephen's question above. Write in your thoughts. I, too, would love to know what interests you most about historical novels and why. I HOPE I DRAW YOUR NAME!
Congratulations to Charity Lyman of Nauvoo, IL. Be watching for Stephen's book as soon as it releases!