This Woman's Experiences Make You Wish You Could've Hidden in Her Suitcase a Time or Two!

She's a traveling girl, and you don't want to miss reading a few amazing things about her. 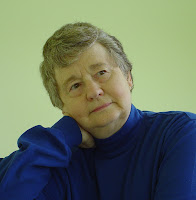 Join me in welcoming Ann Gahlia O'Barr-Breedlove, author and former Foreign Service Officer for the United States Department of State from 1990 to 2004, to A Pen for Your Thoughts. Ann's Assignments included tours in U.S. embassies and consulates in Saudi Arabia, Tunisia, Algeria, Canada, and at the State Department in Washington, D.C.

Her published articles include: “French Diary,” State Department Magazine (December, 1996); “Bringing In The Kingdom With 51 Percent,” Liberty Magazine (November, 2005); and “Jeddah and the 1991 Gulf War” on the American Diplomacy website (March, 2006).
Ann lives on an island in Washington State with her husband.
SDC: We do welcome you, Ann. I'm really looking forward to this interview and sharing you with the world. Please tell us about your book and why you wrote it.
AGO: SINGING IN BABYLON began, as most of my stories do, with a few scenes roiling in my imagination, in this case concerning an American woman struggling with life in Saudi Arabia, where she teaches English. She’s attracted to an American journalist she meets but is turned off by his arrogance. She’s independent and hates relying on a man, but in Saudi Arabia she can’t even drive. He saves her from boredom as well as more serious dangers. Eventually, in an emotional sense, she rescues him. He’s a Christian, as she is, but a secret from his past gnaws at him. As their lives intertwine, this hidden past threatens their relationship, and he must deal with it. Living in a country that forbids the open practice of Christianity, their faith grows “in exile” as Jewish faith did in ancient Babylon. Returning to their own country, they understand that Christians can be “in exile” even there.
SKC: Sounds very intriguing. What made you decide to write in this particular genre?
AGO: I didn’t consciously pick a genre. I just wrote the story as the characters experienced it. I enjoy most genres if the characters grab me, though all of my stories include a love element.
SKC: How did you do your research for this style of writing? And how easy or difficult is that for you?
AGO: Since I lived for several years in Saudi Arabia, much of the material for both Kate and Philip, the protagonists, came from my background. I worked for the U.S. State Department interviewing applicants for visas to visit the U.S. and knew about visa fraud and the risks desperate people will take to enter the U.S. This helped me with Philip’s investigation of illegal immigration. Like many authors, I used the Internet for most of the rest of my research.
At first, research can seem an interruption to my writing, but after I begin delving into topics, I’m caught up in it.
SKC: Along with book reading, I love to make use of the internet as well. How long have you been writing, Ann?
AGO: I began writing short stories and curriculum material for the Southern Baptist Convention soon after college. The precursor to B&H, Broadman, published a novel of mine, FIRST LIGHT. However, as my jobs became more demanding, especially after I joined the State Department and worked overseas, I wrote less, except for work-related reports. The experiences, however, provide background for my writing, issues like child custody cases between American and non-American parents, wives abused by foreign husbands, and Americans killed/injured in terrorist incidents.
After leaving the State Department, I began writing full time.
SKC: We'd like to hear more about your publisher. How did they find you? And what made you select them over a different one?
AGO: I’ve thoroughly enjoyed working with Ramona Tucker and Jeff Nesbit at OakTara Publishers. Jeff wrote me an email asking to see one of my novels after I created an entry for it in The Writer’s Edge Service. I sent SINGING IN BABYLON to Jeff, which OakTara accepted, plus two others that we are currently working on for publication. The company is savvy about the new era of book publishing. Their books are published in both print and digital format.
SKC: I've done research on The Writer's Edge Service, and it sounds as if it worked well for you. That's wonderful. Tell us, Ann, what excites you most about your writing experience?
AGO: I love to grow the characters after I’ve written the basic story. That’s when I rewrite and edit umpteen times, which I enjoy the most about writing. My words seem dead until I’ve worked with the characters and the story. When the characters become friends I’d like to know forever, I realize I’m getting somewhere. That’s probably why I tend to include characters from past novels in later stories, sometimes in supporting roles.
SKC: Although I'm certain there are many others, you are the first that has shared why the rewriting and editing can be so enjoyable. What other books are your reading right now?
AGO: I just finished Lisa Samson’s Resurrection in May. I’m reading an old classic for a book club I’m in (one of two), Thorton Wilder’s The Eighth Day. I like Wendell Berry’s series about a Kentucky town in which different characters weave in and out, also Jan Karon’s Mitford series. I love the way you come to know her characters as the series progresses. I read nonfiction, too, both books and magazines, about world events, because my writing niche concerns Christians in global professions.
SKC: Yes, Jan Karon has a style all her own, doesn't she? What do you have in the works for later?
AGO: As I mentioned, I have two more books under contract with OakTara. QUIET DECEPTION is a mystery romance set on a Christian college campus following the disappearance of a professor. A colleague and one of his students, a young woman with her own problems, develop a love/hate relationship as they are drawn into the missing man’s life. SEARCHING FOR HOME is the story of an artistically talented woman from Tennessee who travels to the island of Cyprus and meets a man from a totally different background, a U.S. diplomat. They struggle to establish a relationship to escape past losses, despite their differences and a world that becomes increasingly dangerous.

SKC: We'll look forward to when they are released. I hear you have a book to offer the readers here at A Pen for Your Thoughts. Tell us which one it is and also how the readers can find you on the web.
AGO: It’s SINGING IN BABYLON. They can find me at www.AnnGayliaOBarr.com  or on my blog http://ScribblingsFromExile.blogspot.com .
SKC: Thank you so much for being with us. This has been a pleasure. Your experiences have been so enlightening to us. I'm sure your books will be as well.
To the readers and viewers of this interview, as always, we have a little challenge for you. I will look forward to drawing one of your names at random to be a winner of Ann's delightful book, SINGING IN BABYLON. Here is the challenge. It's really not difficult.
Please tell us about a unique setting you would like to read about,
but especially why it would be important to you.
Remember to include an email address. Thanks so much.
Congratulations to Marci Kitchen of Oregon. Your book is on its way! And thank you for participating in the interview with Ann.﻿
Posted by Unknown at 11:11 AM