Will God Come Through for You? Ask Delia this Week...

This week we are pleased to welcome Delia Latham to A Pen for Your Thoughts who has graciously offered to share with us a reflection on TRUST. But first, let's read a little about Delia herself.
DELIA LATHAM is a Christian wife, mother, grandmother, sister, and friend. While she considers each of these relationships important, she treasures most of all her role as a child of the King and an heir to the throne.

A former newspaper staff writer, Delia promised herself a novel for years, while raising her four children, working at various jobs and writing the occasional article, poem, or song. She finally had one published in 2006. (Almost Like a Song, currently out of print.) Vintage Romance Publishing released Goldeneyes in 2008. A Christian historical romance with a touch of the divine, Goldeneyes is set in the farm country of the author’s childhood, and therefore close to her heart. In 2010, White Rose Publishing released Yesterday’s Promise—originally Almost Like a Song—in electronic format. A children’s book, Adam’s Wings, will be available in December 2010.
Delia grew up in Weedpatch, a tiny agricultural community near Bakersfield, in California’s San Joaquin Valley. She and her husband Johnny recently transplanted from that area to Okmulgee, Oklahoma.
At present, she is at work on a contemporary series.
Yesterday’s Promise

A whirlwind romance amidst the natural splendor of Yosemite National Park, a spur-of-the-moment wedding, and a young bride who awakens the morning after to find her new husband gone with the mountain wind.
Songbird Hannah Johns supports the child born of that ill-fated union by singing in a dinner lounge. Her dream of someday owning the elite establishment and turning it into a venue more suited to her Christian values is shattered when an unexpected transaction places it in the hands of Brock Ellis, the handsome biker who abandoned her in their honeymoon suite.
Ensuing sparks fly high, revealing buried secrets and forgotten pasts. Seeking to find peace with her painful past, Hannah returns to Yosemite, only to have Brock show up hard on her heels. Back where it all began, she finds herself in danger of losing her heart yet again to the man who shattered it the first time around.

And God Came Through
~ by Delia Latham
When I am afraid, I will trust in you
~ Psalm 56:3 (NIV)
“Daddy will catch me. Daddy will catch me. Daddy will catch me.”
The words played themselves again and again in my terrified mind, while my little eight-year-old heart beat a double-time rhythm. I scrunched my eyes shut and kept them closed to avoid seeing how far below me Daddy actually stood.
I’d climbed further up the huge cottonwood tree in our yard than I realized. When Mama stepped outside to call me in to dinner, I looked down—and immediately froze in terror. I couldn’t make myself let go of the branch I clung to, and I couldn’t make my feet move to climb back down the way I’d come.
Daddy stood beneath me, squinting up through the leaves and branches and encouraging me to drop down into his arms. “I’ll catch you, sweetie,” he assured me. “You know Daddy won’t let you hit the ground.”
And I did know that. My Daddy was my hero. If he said he’d catch me, then he’d do just that.
But I wasn’t sure I could let go of that branch even for him. It wasn’t Daddy I didn’t trust, it was me. If I let go of that sturdy branch, I might fall. Jumping deliberately into my father’s strong arms was one thing. Falling without meaning to was another matter entirely.
Eventually I did, of course. Daddy’s gentle prodding finally convinced me to ease my arms away from that safe limb one slow inch at a time. Free of the anchor I held to, it was a little easier to launch myself off the one I sat on and drop out of the tree. Daddy caught me, just like he promised.
Since then, I’ve found myself back in that tree so many times spiritually. There I sit, clinging to whatever makes me feel safe and secure, while Jesus gently urges me to let it go and trust Him to take care of me. Just as the child I was knew that my Daddy wouldn’t let me hit the ground, the more mature me knows my God will be there for me. He won’t let me down. He won’t let me fall. No matter what I’ve managed to get myself into, He will be my anchor, my Rock, and my salvation.
But I have to trust Him. I have to make myself let go and let God.
Naaman had to dip himself seven times in Jordan before he was cleansed of leprosy. Could God have simply healed him without that gesture? Of course He could! But Naaman was a highly respected man, one who had wealth, servants, gold, silver and fine clothing. For that exalted ruler to step down into Jordan’s muddy water, to dip his entire body into the filthy sludge—not once, not twice, but seven times—had to be a humbling experience. God didn’t ask him to go swimming in a nice, calm, clean lake. God required the sacrifice of a mud bath! But Naaman did it, trusting that God would heal him for his act of obedience.


And God came through.
The Israelites had to walk around the Jericho wall thirteen times before God crumbled it and let them have the city. They traversed those gigantic strongholds in complete silence—no pleasant chitchat to pass the time, no banter, no singing of hymns, no sharing of jokes and telling of tales. They carried heavy weapons and supplies, once each day for six days, then seven times around on the seventh. Their arms grew tired, their feet hurt, and they didn’t even get to see a preliminary crack in the wall to give them hope. It wasn’t easy, and surely they wondered, looking at those massive walls, if they were not only wasting time, but making fools of themselves as they did so. But God promised them the city. He hadn’t failed them yet, so they trusted that He would do as He promised. They marched.


And God came through.
Elijah asked the widow of Zarephath, during a time of severe famine, to make food for him from the remaining flour and oil she had in her home. This woman had a son to think about. Already, she was planning their last meal, knowing they would die of hunger when those supplies were gone. Elijah’s request was not an easy one to grant…but, you see, he made a promise: “For thus says the Lord God of Israel: ‘The bin of flour shall not be used up, nor shall the jar of oil run dry, until the day the Lord sends rain on the earth.” So she did as he asked.


And God came through.
Most of the time, all God asks is that we trust Him.
In my novel, Yesterday’s Promise, my heroine makes a major decision in haste, without talking to God about it first. For years afterward, she suffers the repercussions of that negligence.
First she comes home from vacation pregnant. Home is the parsonage of a large church pastored by her father. As in any Christian group, there are always a few pious individuals standing ready to point fingers and place judgment. Staying around while her belly grows big with child will only bring shame on Hannah’s beloved father. So she leaves. Now she’s alone in a city where she knows not a soul, and is forced to use the only marketing skill she possesses—her voice. She takes a job singing in a dinner lounge, another decision that might shock some godly folks to their self-righteous cores. But Hannah has a baby to think of—a mouth besides her own to feed. She does what she has to do, remaining pure and holy all the while—despite how her situation might appear to the everyday onlooker.
Life isn’t easy, and there are times when the load seems more than my little heroine can bear. But through it all—every moment of weakness, every disappointment—she trusts in God to have her back. She’s fortunate to have a wonderful friend (one Hannah herself led to the Lord) to bear her up when she’s down, as in the following scene:


“Oh, Lori.” Hannah’s voice caught and she swallowed hard. “Everything I’ve tried to
do to make things better for Davey…destroyed, all in one miserable day.”
The other woman clucked her tongue, her arched brows drawing together. “Now, you
just listen to me, missy. Nothing’s destroyed, only threatened a bit. No weapon that
comes against you can prosper, you know. It’s a promise from the Good Book!” She
nodded, hiking those auburn brows high onto her forehead. “So with that in mind,
remind me again, darlin’—what exactly is it you’re worried about?”
Lori is a bit of comic relief in the storyline, which contains a tremendous amount of pain and emotion. But despite her love of laughter, she’s a wise woman, as the example above shows. If we truly believe the promises of God, what is there to worry about? Our heavenly Father loves us. He wants what is best for us.
Sometimes He asks us to step out of our comfort zones. He might require enough trust on our part to place a stone of faith in a slingshot of fear and aim it toward the giant, whatever our particular “giant” might be. Our concern, then, is to trust that God will guide that stone to the place it will have the most effect. Our challenge is to rest in the assurance that if Jesus said it, we believe it. Our only requirement is to trust Him.


And our God will come through.
Surely God is my salvation; I will trust and not be afraid.
The LORD, the LORD, is my strength and my song; he has become my salvation."
~ Isaiah 12:2 (NIV)
SDC: Thank you so much for that, Delia. How fitting and appropriate your words of encouragement and that message of trust are to us all. 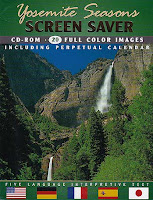 I also want to thank you for offering to provide a PDF of your new book, Yesterday's Promise, to a winning guest here at A Pen for Your Thoughts and a Yosemite screensaver program that will be a pleasure to have in the background as we read your story.
What reflection question do you have for us to ponder this week and respond to?
DELIA: What part of your life do you find the hardest to trust God with, and why? What can you do to increase your confidence in His promises?
SDC: Ah! A great couple of questions. Thanks.
Okay, readers... We look forward to your comments. When you respond, don't forget to leave your email address!
Find out more about Delia over at Facebook,
at her website, and at her blogspots:
www.delialatham.net
www.themelodywithin.blogspot.com
www.bookshelfnewsletter.blogspot.com

Congratulations to LuAnn Morgan of Othello, Washington! Delia will be in touch with you soon, LuAnn. And thanks for writing in.
Posted by Unknown at 3:54 PM