You've Got to Meet Jamie Carey!

Here she is folks...JAMIE CAREY. 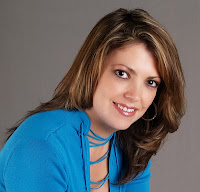 When she was six, Jamie's parents met Jesus and soon after started a church. It changed everything. Road trips with her dad—to and from Bible studies across Indiana—filled with talks of things beyond earth’s bounds, creation and the fall, God and Jesus, the rapture, the earthly walk compared to the spiritual walk, and how we are born for more than what we can see or touch.

The highlight of those nights was stopping at a truck stop in the middle of the night where her dad would spend a little of the offering basket on two slices of pie and a couple of Cokes. Nothing ever felt so special as a middle of the night slice of pie with her dad. And nothing could stop the writing pouring out of her.

As Jamie's relationship with God grew, she discovered her heart was filled with songs and poetry. During high school she wrote lyrics for her brother's band and sang them too.

After college, Jamie married, had two sons and decided to stay home with them. While she homeschooled she wrote skits, poems, plays and short stories for school and church. When her eldest son turned five she dove into the world of novels. She'd read romance novels for years, but couldn't relate to the flawless, saintly heroines in Christian romance novels. So she decided to write her own.
AND THAT'S HOW IT BEGAN...

Snow Angel was born on a frosty night in an old farmhouse in Fishers, Indiana, where the cold floor gave plenty of motivation for the snow scene.

Jamie loves to write late at night when the house is quiet and the darkness seems alive. Her characters, Elizabeth and Noah had been play acting in her head for a long time so the story went fast.

Ten years later Snow Angel was published and won the ForeWord magazine Romance Book of the Year winner, was a National “Best Books 2007” Awards winner, and a 2008 RITA Awards® Best First Book finalist. It was the beginning of her dream career.

Jamie and her husband Tony live in Indianapolis with their three sons and a giant of a dog named Leo.

If she could only say one thing to her readers it would be, "Live the dreams God has destined you for!"

SKC: What a great introduction about yourself, Jamie! We welcome you here and are anxious to hear about your new project. Tell us about it.

Jamie: Angel's Den is set in 1808 in the "Gateway to the West" city of St. Louis. Lewis and Clark had returned a few years earlier from their monumental trek to the Pacific and Thomas Jefferson had doubled our nation with the Louisiana Purchase giving folks a refueled interest in traveling west. Enter Emma Daring, a woman who has had a sheltered upbringing in St. Louis and has little idea the stage upon which she is about to be thrust. A man comes along who sweeps her off her feet with his perfect looks and charming ways, but he has dark secrets and demons that seek to destroy his new wife. Emma Daring has no idea how strong she is going to have to be.

Angel's Den became something more than a novel as I wrote it. As the story unfolded, I became aware of what so many women around the world experience in their marriages and relationships with abusive men. Whether the abuse is physical, emotional, verbal, sexual or an overall suppression of a woman's identity, I believe there are millions of women who will relate to Emma's struggle. I didn't know how God was going to save Emma. I was surprised who showed up to help her. I hope and pray that anyone going through something similar will find, as Emma does, her landing place of security and hope. That's my prayer for this book.

SKC: And such an inspiring prayer for so many. What first inspired you to write and what keeps you going now that you can add to your testimony above?

Jamie: My voracious love of reading and not finding enough books that I wanted to read first inspired me to write. I like the darker, gothic styles found in books like Jane Eyre, Wuthering Heights, Rebecca, The Scarlet Letter, The Last of the Mohicans, Les Misérables, etc. I also love historical romance. I guess I wanted something that mixed the two and I wasn't finding it in CBA. Now? I'm very blessed to get to write what I want and people seem to connect with it and enjoy it too. PTL! I believe I'm doing what I was put on this earth to do (aside from being His daughter, a wife and mother, sister and friend, etc. :). It's very satisfying work and I am so thankful!

SKC: I have to agree with you. Even the plugging away each day and wondering when one will get somewhere is satisfying somehow, I think. Starting and ending a book is often the most difficult for so many writers. Describe how you come up with the beginning and end to your story.

Jamie: I think the beginning and end are the most exciting parts. It's the middle that I struggle with sometimes. The beginning for me is usually a scene I've had play across my mind for months. It might be very short and small, but it gives me this impetus - a feel for the characters, a mood, a starting off point. It's a little nerve wracking to start typing on that first blank page, that's true, but I equate it to running full speed down a diving board, taking that big jump at the end and then diving into the pool. Thrilling!

The end is always bittersweet and teary for me. If I'm not bawling at the end then something is wrong and I rewrite it until I am! I always want to leave the reader with a big sigh and a tear or two (happy tears!) trickling down their cheeks. Endings are where "happily ever after lives" and I'm a big "happily ever after" kind of girl!

SKC: What do you believe is the KEY to writing a good book?


Jamie: I had someone once tell me to "cut my wrists and bleed into the work." That might sound a bit dramatic but I've found it to be true. When I'm writing a scene and it's not going as well as I know it could, I stop and look at it and just about every time I realize I'm not being honest. I'm saying what I think people want to hear, or what I "should" be saying, or some level of compromise so that I appear a certain way. That's a real trap to a writer (or anyone trying to create). I have to remind myself that God sees every little, minute, teeny-tiny detail of my every thought, motivation, personality, all the circumstances that have shaped my thinking/emotional responses/reactions. He knows it all. And He loves and accepts me as a spotless lamb because of what His son did on the cross and my faith in that. Then I take a big breath and write what's true and hope it rings true with others.

SKC: It certainly does with me. And I like the way you put it with that "bleed into the work" idea. I saw when I read up on you that you and your family live in Indiana. I have family there. How do you create your settings, and do you take advantage of the area that’s around you or do you research and discover new places?


Jamie: Where does your family live? My third book, Wind Dancer, is set in my hometown of Vincennes, Indiana. Other than that I have set my books in Alaska, Pennsylvania, England (Northumberland and London), France (Paris and Carcassonne) St. Louis and the west, and most recently, colonial Virginia. I LOVE traveling, both in my mind through books, websites, movies etc. and when I can in person. I think I need to write a book set in the Caribbean. I'm dying to go to Cabo San Lucas.

SKC: My grandparents were from Muncie and I think Cowan. I have cousins and an aunt and others who live in Indianapolis too. Likely other places. It's been a while. I love to travel like you too, by the way. Back to writing. Why do so many authors have a difficult time coming up with their proposals?

Jamie: I guess proposals are a different style of writing than novel writing - more business oriented vs. creative writing. That might be challenging to some. I find article/blog writing challenging but not proposals so much. I have found that writing out a detailed synopsis before starting the novel can really help flesh out the story. Then again, it always changes as I write so sometimes it turns out better if I write the synopsis after I'm finished.

SKC: After you finish your present project what plans do you have?

Jamie: I am working on my sixth novel about a woman who comes to America from England and meets a ship captain. Lots of sparring going on between them right now which is great fun! It's a bit lighter than some of my other novels and that's been enjoyable to write.

SKC: Sounds intriguing! We appreciate that you are planning to donate a book to one of the readers here at A Pen for Your Thoughts. What would you like to ask our readers today?

Jamie: I can't think of any questions, but I would like to say a big thank you to anyone who reads this interview and Angel's Den! I hope you are blessed by it!

SKC: Then I will come up with that question for you, Jamie. In the meantime it’s been a pleasure having you here. Please let us know where your book can be found and where our readers can learn more about you.

Jamie: You can find my books at your local Christian book stores, Books A Million, Barnes & Noble, some Wal-Mart stores, online at Amazon and CBD. You can view book trailers and learn more about my books at http://www.jamiecarie.com/. Thanks so much for the interview, Shirley!

GREAT INTERVIEW! LIKE TALKING FACE TO FACE. I LOVE THOSE.
Okay, readers and other writers...Here is your question. Be sure to respond so you maybe win this exciting book of Jamie's.

I was really touched by Jamie's personal biography which she gave us in such great detail. What about her life moved you most?

Congratulations to Linda Wagner of St Paul, Minnesota and Michelle Vasquez of Hewitt, Texas! You both have just won Jamie's new book! Be watching for it and thank you so much for following us here at A Pen for Your Thoughts.
Posted by Unknown at 10:54 AM