Nothing Like a Little Suspense to Keep You on Your Toes 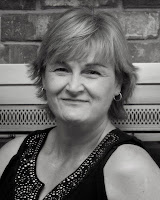 Marcy G. Dyer is a Registered Nurse and suspense author. Like so many other writers, she began writing at a very young age. Her debut novel, Down & Out - Desert Winds Series Book One, is available now. The second book in the series, Out For Blood, will be released on 08/11/2013.

In addition to writing, Marcy is a freelance editor. She does editing for individuals, Desert Breeze Publishing, and Prism Book Group.

Marcy is an alumni of the Christian Writer's Guild and long-time member of American Christian Fiction Writers. She hosts a small critique group for ACFW and is involved in two other critique groups.

As followers of Jesus Christ, Marcy and her family are active members of Crossroads Fellowship in Odessa, Texas.

A little about DOWN & OUT
When a down on her luck publicist moves home to Odessa, Texas, she’s thrust into a volatile job with a handsome security consultant showing her the ropes when a stranger decides she must be his and he’s determined to win her love – at any cost. Can the handsome consultant protect her from the stalker or will she end up buried in the desert?

Excerpt
Candace hunkered down in the floorboard of the truck. Why had she taken this job? She really didn't need to eat. Maybe if she had to do without food for a while she could fit into smaller jeans, like the munchkin at the western store wore.

A gunshot rang out, and Candace vomited.

Enough was enough. She wouldn't put up with the leprechaun's taunts any longer.

"I'm sorry if I don't live up to your standards, Dumpling," she snapped. "I've never had anyone shoot at me."

"Enough, you two. Quit acting like spoiled junior-high girls. If you haven't realized it, we're in a little bit of a mess here."

And if she ever got out of it, Candace would tell Carl he could shove his job. Everyone told her how dangerous New York would be. Right. She never got shot at there.

More shots rang out, and her hands shook. "Thank goodness we're in the truck. If they don't shoot the windows, we should be okay. Right?"

Josiah barked out a short laugh. "Don't know much ‘bout guns, do ya, doll?"

"A bullet can go through the metal of the door." Beth Ann's tone grew snarkier with each word. "It may or may not have enough force to come all the way inside depending upon the caliber. There's your education for today, Barbie."

"Thanks for nothing, Dumpling."

Sirens sounded in the distance, and Candace prayed the police would arrive in time to save them. She couldn't die like this, hunkered down in the floor of a flatbed truck with a puke-covered seat. At least she hadn't peed her pants. Yet.